After our sea adventure where we searched for komodo dragons it was time to go from sea level to 3726 meters above it!

It was the first time I (Sarah) would climb a mountain! Well, I had hiked a few times before but never longer than a day. First we went to the outdoor store, because we wanted to be prepared. Decent hiking shoes, walking sticks, windstopper, etc. I was fully equipped! The other couple who joined us even asked me if I was a professional hiker! Ha! Now the only thing left to do was prove it…

At around 5am a minibus picked us up at the Living Asia Resort & Spa in Senggigi. We drove for about 2 hours to Sembalun, where we received a small breakfast (banana pancake) and prepared ourselves for the big climb!

Sembalun lies at a height of 1100 m. We first walked through savannah grassland with easy ups and downs, passed plantations, some farmers and lots of cows! We stopped for lunch at POS I. 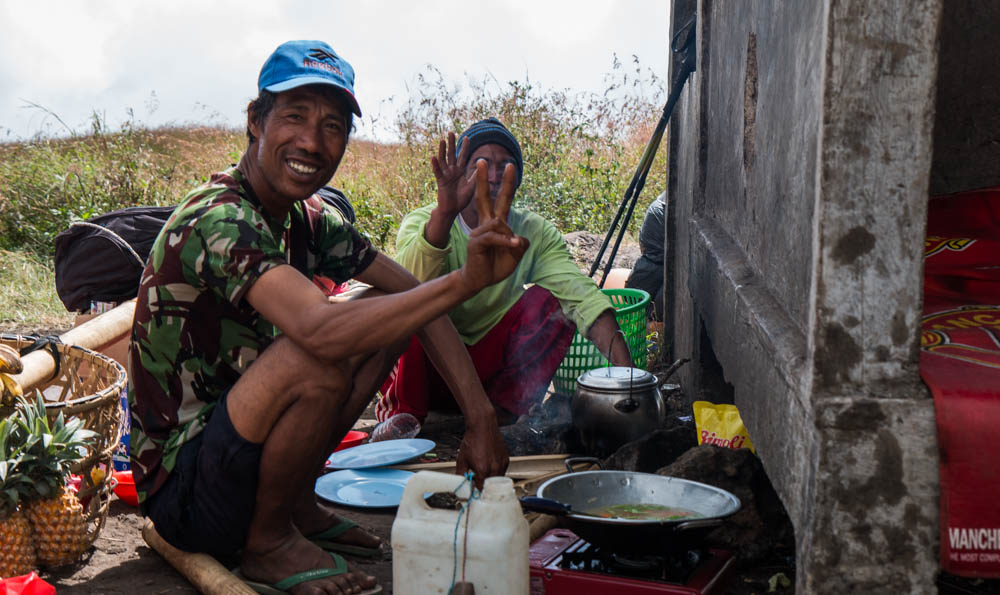 The 5 porters who accompanied us, carried all the food, drinks, tents and sleeping bags needed for the next 3 days. They only used a bamboo pole with 2 baskets attached that they carried across their shoulders. Even with all this weight they still managed to bypass us all the time – while only wearing flip flops! – c r a z y . . .

After a delicious lunch the real work was waiting for us. The hills gradually became more and more steep. But we made good progress, even our guide ‘Pie’ couldn’t follow us! I guess he saved his powers, because he knew what was coming…

We passed rivers of solidified lava and unfortunately lots of garbage at every POS. Other people on the boat trip, who also climbed Rinjani, had already warned us about the garbage. Along the way it was actually okay, but around the camping sites and POS there was a lot of garbage left behind… 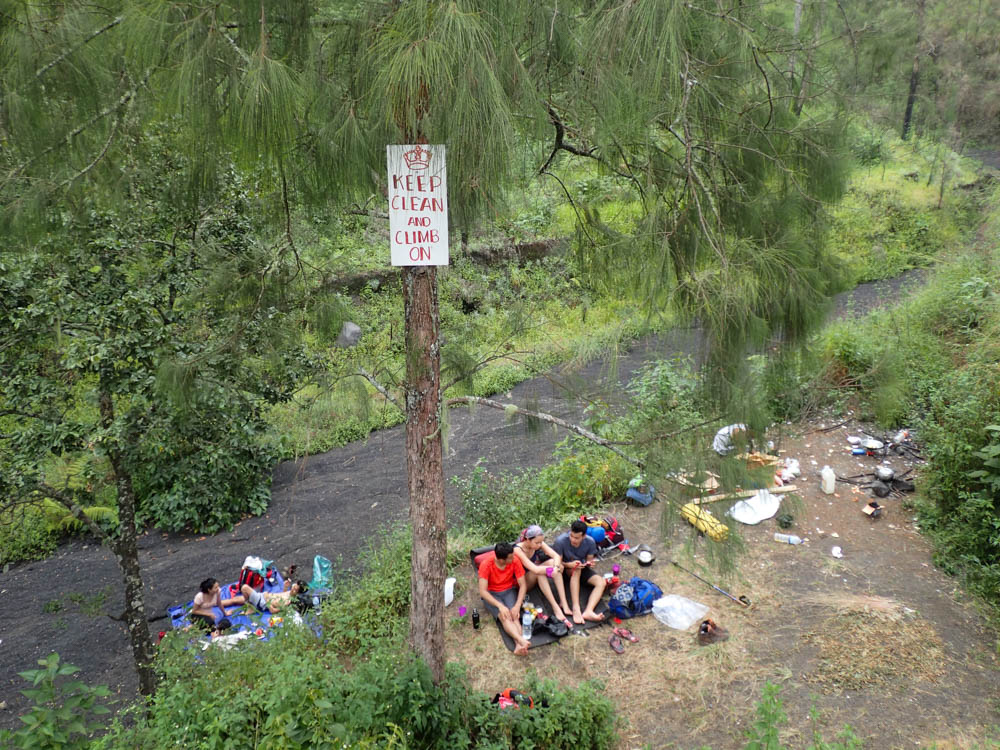 We chose to book with Rinjani Trekking Club, because they have a “garbage management” program. The porters are asked to collect the garbage and bring it back with them. We also brought a bag to gather our own personal garbage. We observed the porters while they were cooking and saw that they do collect the empty cans and bottles. But sadly small papers, lids, napkins, etc. were still left behind…

We continued hiking all the way to the second Rim or Sembalun crater. When we arrived, the porters had already set up our tents and were welcoming us with hot tea! From the crater rim we had a view over the crater lake (at least when the clouds passed). It already looked so nice but it wasn’t until the next day, when the sky was clear, that we saw HOW beautiful it really was! In between the waves of clouds that floated by, Mount Rinjani revealed its peak to us… This is where we’re going tomorrow! 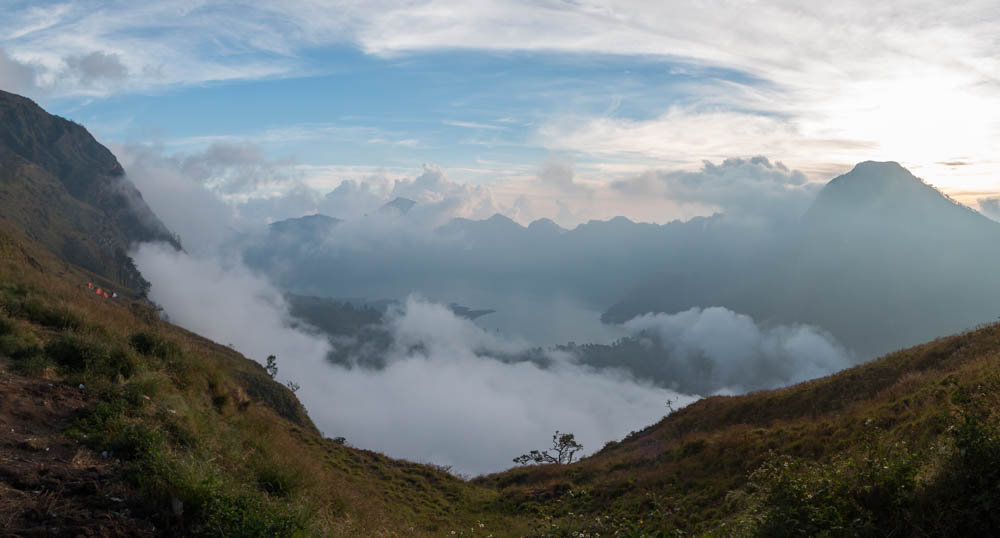 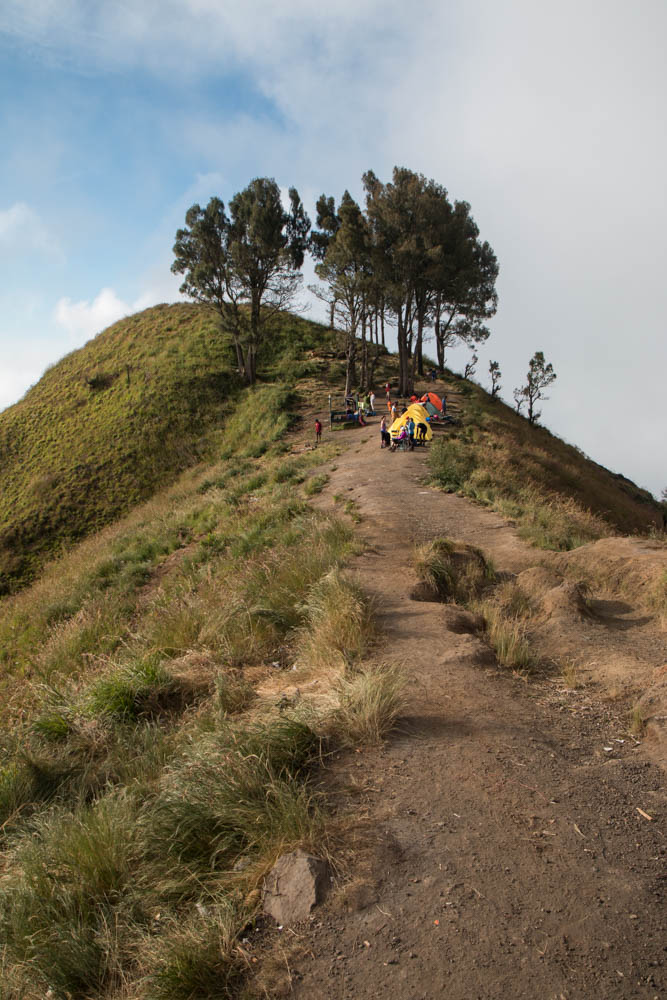 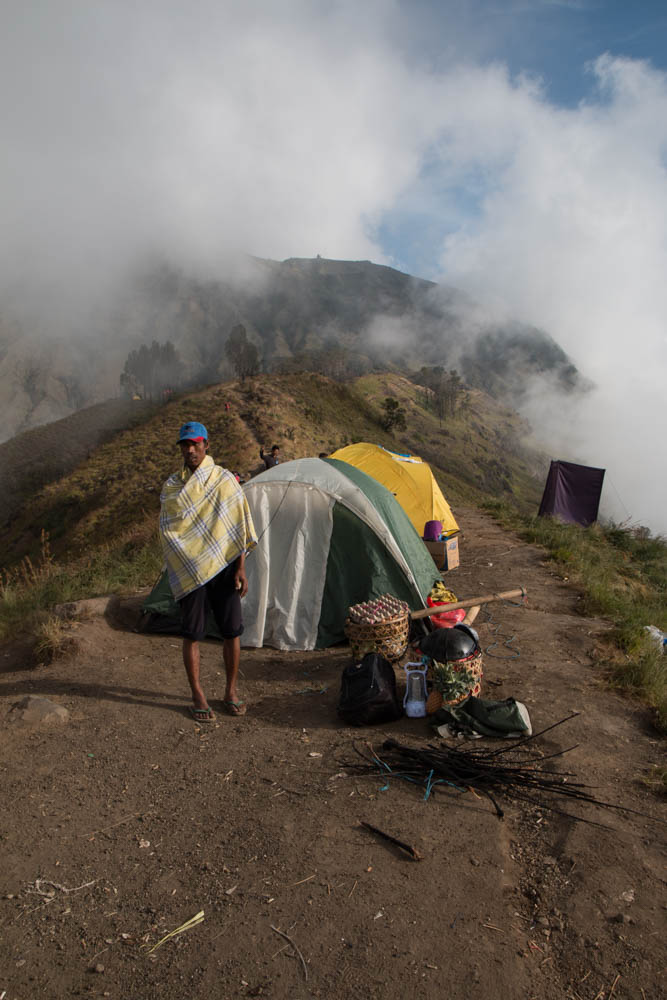 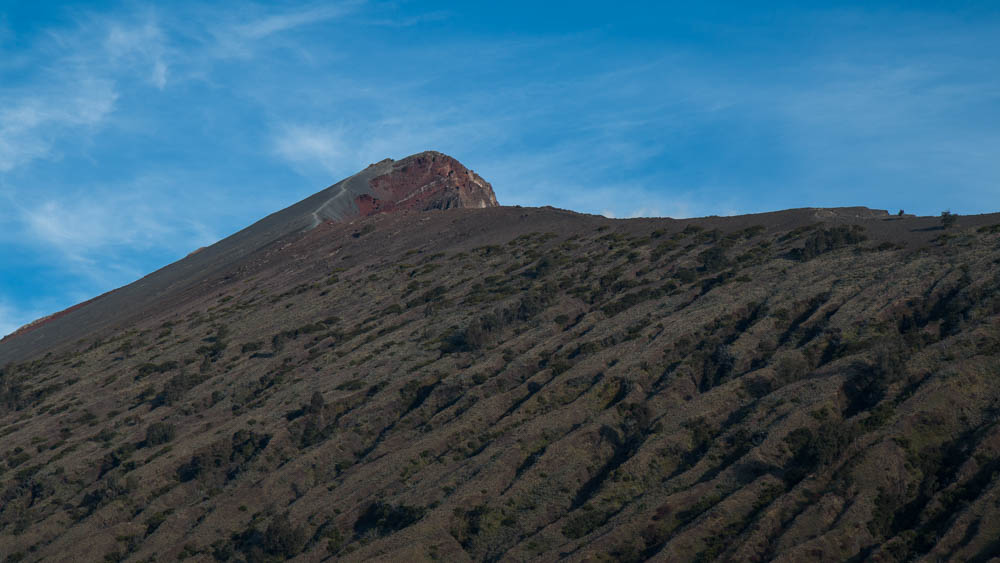 After enjoying another nice meal during the sunset, we immediately crawled into our tent for a short night of sleep…

2 am: wakey wakey! Headlights on and prepare your bag for the hike to the top! You can leave everything you don’t need in the tent, because you’ll return to the campsite afterwards.

The first part is kinda difficult, because it’s steep, rocky, and slippery. After managing this, the second part is ok to walk. But gradually it starts getting steeper and steeper… Since you’re walking on the volcano slopes, the ashes and loose gravel make it difficult to walk. Everyone will tell you: 2 steps up & 1 step down. Especially near the end when the slope becomes really steep, you keep sliding back down. I was so glad I bought walking sticks!

But somehow we managed to arrive at 6 am sharp, just in time for the sunrise! This panorama is the reason why you’ve been tramping all morning. Gradually the sun sheds more light on the crater lake and the view gets better and better. We could even see one of Bali’s mountains in the distance! 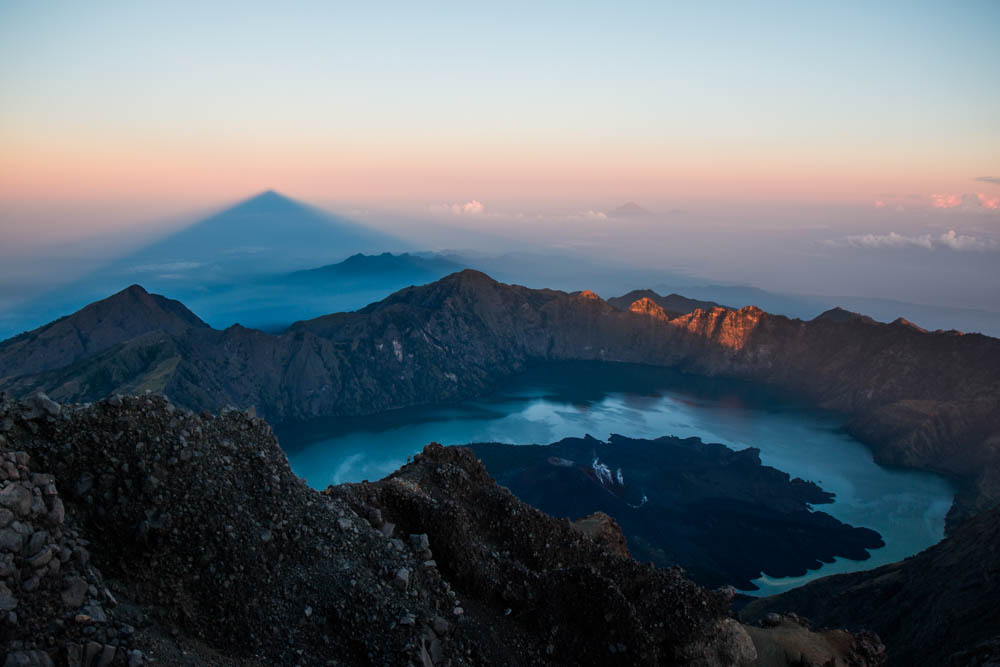 After snapping pictures for like an hour, it was time to start descending. This time it’s easier, as you are sliding down, like skiing. The last part is again very slippery! I was happy to be back at the base camp. Unfortunately we only had about 30 min to eat and get a move on. 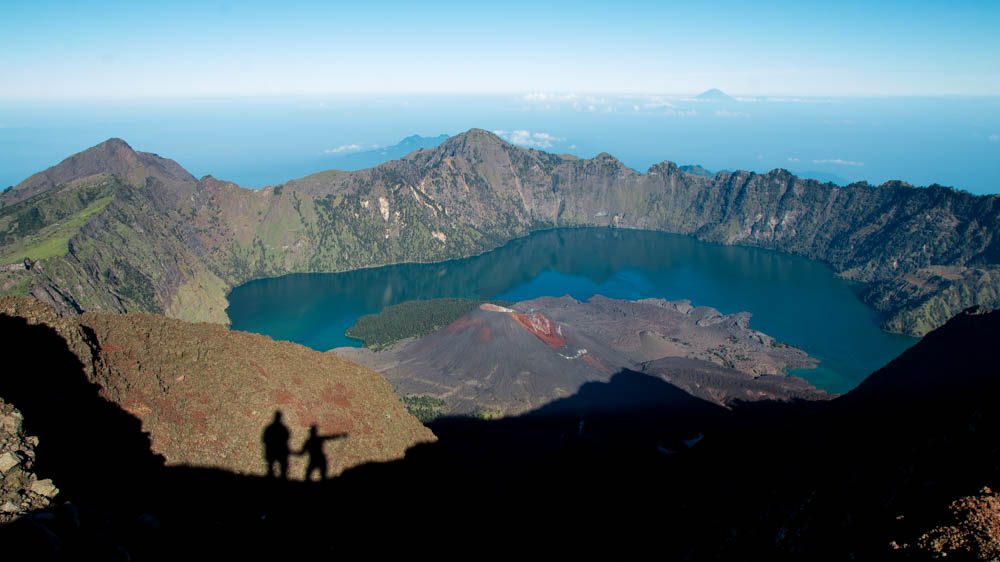 We had to descend for another 3 hours to get to crater lake, called Segara Anak Lake and… the hot springs! I was so looking forward to this! Haaa soaking my aching feet in hot water! Before we were told we would be able to enjoy the hot springs for 2 hours. (Or did I just dreamed that?) 2 hours of relaxing and swimming! Not. When we arrived, we had 30 minutes to ‘relax’. We walked towards the end of the hot springs, cause the first ones were kinda littered…

If you opt for the 4D3N program, you sleep near the crater lake and enjoy the hot springs much longer. Although it was a short visit, my feet were still very happy. We enjoyed a quick lunch near the lake and continued to hike around it. In the middle of the lake is another small volcano, called Barujari. A plum of smoke is still coming out of this active volcano that emerged after the eruption of Rinjani. Later on we started ascending towards the Senaru crater Rim. 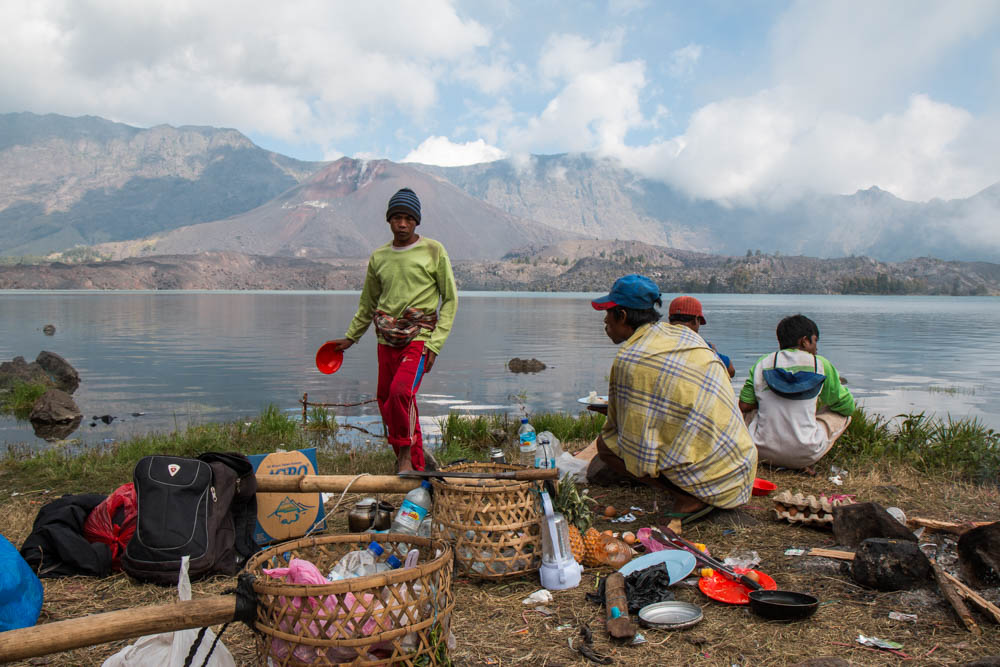 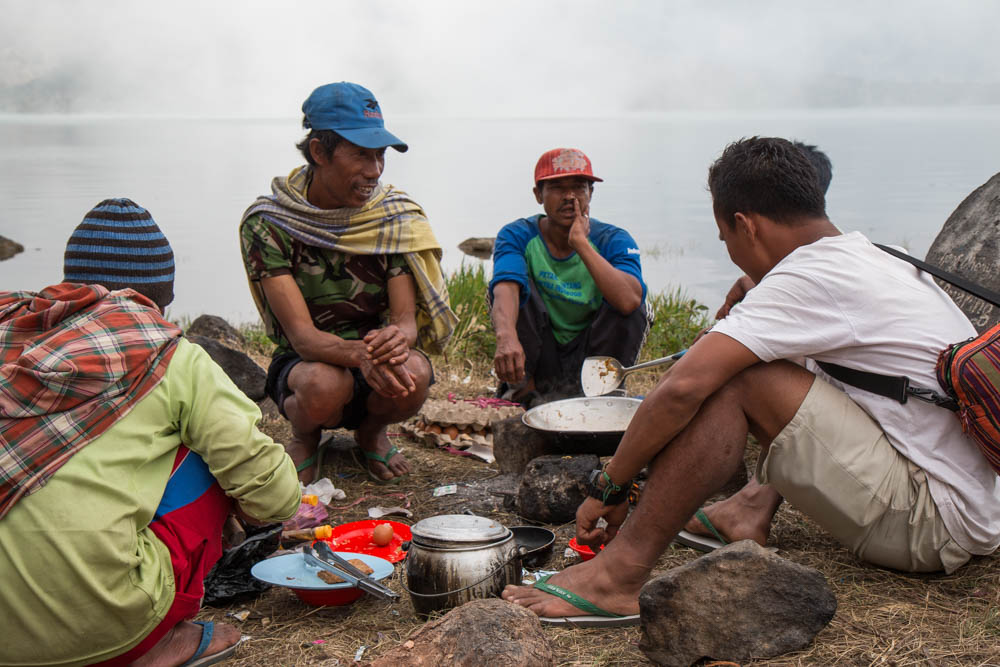 It seemed like forever to get to the first rim! I think Pie was lying about the time to encourage us. Even though he was always smiling, I could see he was also very tired.

He calls the 3D2N program the “ghost program” because it’s so severe.

He likes it when people book the 2D1N program, because that means after 1 night he is back with his family. He has a wife and 2 little kids. The moment he arrives at home, he sleeps and the next day he goes up the mountain again. All the time. Unless the weather conditions don’t permit it. Same goes for the porters. They told us the mountain is like a second home to them. Absolutely nothing but respect for those guys.

We didn’t really camp at the crater rim but a bit lower. (“Just a little further” – aaaah!) Apparently it can get really windy and cold at the rim, that’s why we chose a lower spot. I was so tired I already fell asleep before dinner was ready. The porters made a cosy campfire, which was so nice, but I really couldn’t keep my eyes open anymore. Sander did stay awake for a while and tasted some of their home-brewed rice liquor. 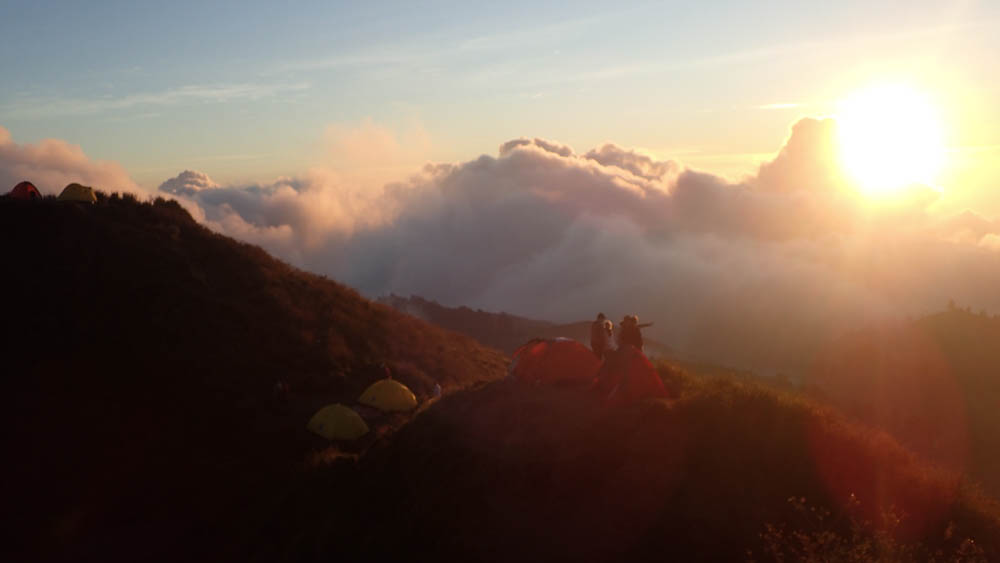 The next morning Pie woke us up at around 7am. One hour later we started to descent towards Senaru village. The first hours it was ok, but gradually everything started to hurt. Turns out I’m better at ascending than descending. We walked through tropical rainforest where the tree roots had formed some kind of ‘stairs’ for us. But the steps were really deep, which makes your legs ache even more. (Unless you have thighs and calves like Sander and are destined to climb mountains)

At one point it all became a bit too much, so I threw my walking sticks aside and started kicking a tree!

Pie, who was walking a bit further, turned around: “Are you alright Sarah?” Luckily I was wearing sunglasses so he couldn’t see the tears welling up – “Of course, yes!”

About one hour after lunch break we finally passed some houses, civilization! After we said our thankyous and goodbyes, we wobbled towards the minivan who’d take us back to the hotel. One hour later we arrived just in time for happy hour by the pool!

Mount Rinjani was magnificent. That moment when you finally reach the peak and turn around to see what crazy road you have covered during the darkness just takes your breath away. Turn around again to behold that stunning view on the volcanic lake and little Barujari. 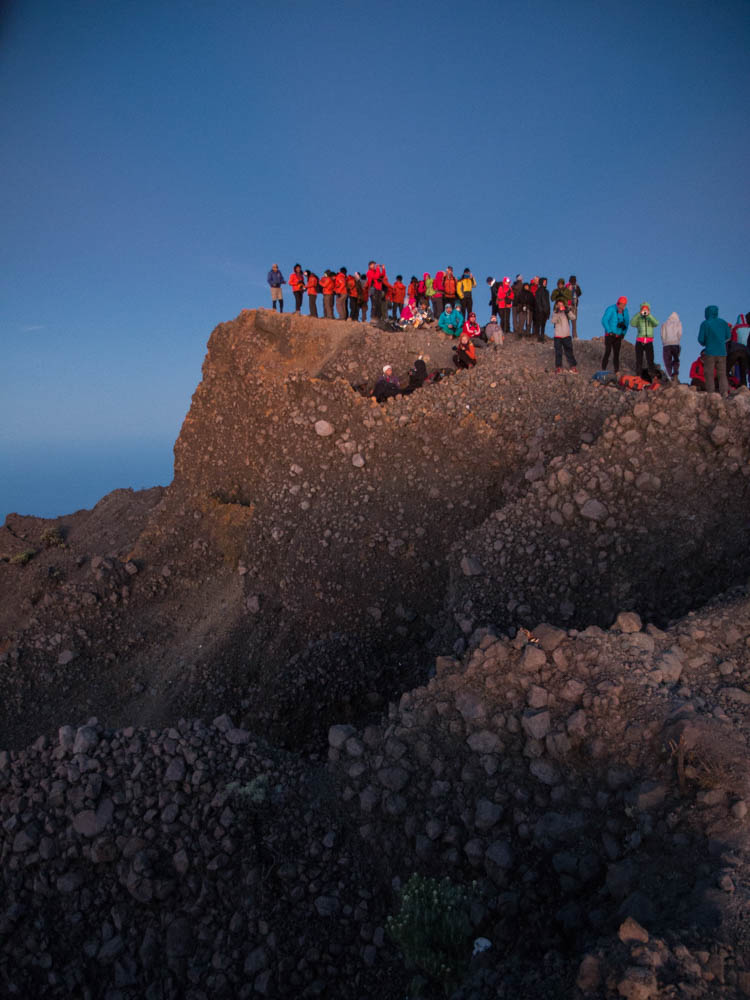 The program was tough. And although it was doable, but it would have been better if we hadn’t been so tired from our 4-day boat trip. So make sure you have enough time before and after your climb to recover. Or opt for another trekking package.

We had a good guide and crazy porters. Every meal was very nice and they always prepared something extra vegetarian for me, which i’m really grateful for. When comparing prices, we probably paid a bit more by paying online in advance. We opted for the standard package (with toilet tent!) and chose this company because of the garbage program. We are glad there are initiatives like this to help protect the environment. I don’t know if other companies have similar rules but I hope there will be some regulations soon to preserve this beautiful piece of nature.

We booked our trip with Rinjani Trekking Club. There are many organizations who have the same name, but ask for Roni, the manager.